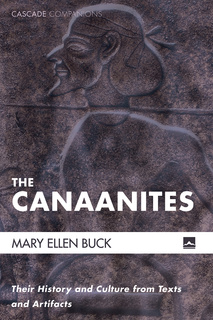 Author: Mary Ellen Buck
Format: As e-book
English
The term Canaanite will be familiar to anyone who has even the most casual familiarity with the Bible. Outside of the terminology for Israel itself, the Canaanites are the most common ethnic group found in the Bible. They are positioned as the foil of the nation of Israel, and the land of Canaan is depicted as the promised allotment of Abraham and his descendants. The terms Canaan and Canaanites are even evoked in modern political discourse, indicating that their importance extends into the present.

With such prominent positioning, it is important to gain a more complete and historically accurate perspective of the Canaanites, their land, history, and rich cultural heritage. So, who were the Canaanites? Where did they live, what did they believe, what do we know about their culture and history, and why do they feature so prominently in the biblical narratives? In this volume, Mary Buck uses original textual and archaeological evidence to answer to these questions. The book follows the history of the Canaanites from their humble origins in the third millennium BCE to the rise of their massive fortified city-states of the Bronze Age, through until their disappearance from the pages of history in the Roman period, only to find their legacy in the politics of the modern Middle East.
More info about the ebook
Publisher: Cascade Books
Published: 2019-10-30
ISBN: 9781498243247
English
Category: Religion & Spirituality
Series: Cascade Companions: 1
Judaism Israel

The Wars of the Jews; Or, The History of the Destruction of Jerusalem

A Short History of Christianity

Learn the Bible in 24 Hours: Old and New Testament

The Mossad: The History and Legacy of Israel’s National Intelligence Agency

The Code of Hammurabi

Nimrud: The History and Legacy of the Ancient Assyrian City

The Code of Hammurabi

Chutzpah: Why Israel Is a Hub of Innovation and Entrepreneurship

Summary of Hitler's Last Days: The Death of the Nazi Regime and the World’s Most Notorious Dictator by Bill O'Reilly

The Big Fella: Babe Ruth and the World He Created