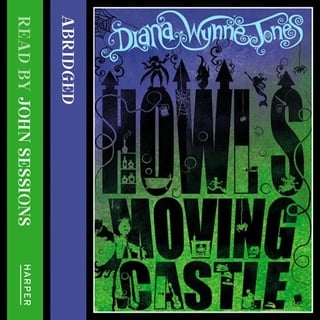 Author: Diana Wynne Jones
Narrator: John Sessions
Format: As audiobook
3H 22Min
English
4.3
Read by John Sessions.
In the land of Ingary, where seven league boots and cloaks of invisibility do exist, Sophie Hatter catches the unwelcome attention of the Witch of the Waste and is put under a spell.

Deciding she has nothing more to lose, Sophie makes her way to the moving castle that hovers on the hills above Market Chipping. But the castle belongs to the dreaded Wizard Howl whose appetite, they say, is satisfied only by the souls of young girls… There she meets Michael, Howl’s apprentice, and Calcifer the Fire Demon, with whom she agrees a pact.
But Sophie isn’t the only one under a curse – her entanglements with Calcifer, Howl, and Michael, and her quest to break her curse, are both gripping and howlingly funny!
Abridged
More information about the audiobook:
Publisher: HarperCollins
Published: 2012-12-06
ISBN: 9780007508440
3H 22Min
English
4.3
Category: Children
Series: Howl's Moving Castle: 1
6 to 9 years 9 to 12 years Kids Fantasy Portal fantasy Fantasy & SciFi favourites SciFi & Fantasy - Kids Fantastic women

Harry Potter and the Goblet of Fire

The Girl Who Drank the Moon

Diego and the Rangers of the Vastlantic

The Girl with the Ghost Machine

When Marnie Was There