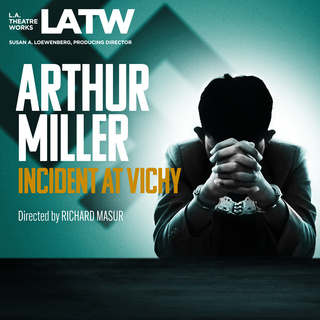 Jon Matthews as Lebeau, A Painter
Arye Gross as Bayard, An Electrician
Robert Lesser as Police Guard/Marchand, A Businessman/Ferrand, A Café Proprietor
Gregory Itzin as Monceau, An Actor
Jamie Hanes as Gypsy/Police Captain
Shahar Sorek as A Waiter/Second Detective
Ben Diskin as A Boy
Andrew Hawkes as A Major
Armin Shimerman as First Detective/Professor Hoffman
Raphael Sbarge as Leduc, A Doctor
Lawrence Pressman as Von Berg, A Prince

Directed by Richard Masur. Recorded before a live audience at the Skirball Cultural Center, Los Angeles in February of 2002.

"One of the most important plays of our time...Incident at Vichy returns the theatre to greatness." — The New York Times
More information about the audiobook:
Publisher: L.A. Theatre Works
Published: 2002-02-01
ISBN: 9781580814645
1H 10Min
English
4
Category: Lyric Poetry