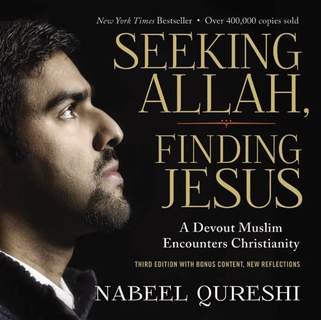 Providing an intimate window into a loving Muslim home, Qureshi shares how he developed a passion for Islam before discovering, almost against his will, evidence that Jesus rose from the dead and claimed to be God. Unable to deny the arguments but not wanting to deny his family, Qureshi struggled with an inner turmoil that will challenge Christians, Muslims, and all those who are interested in the world's greatest religions.

Engaging and thought-provoking, Seeking Allah, Finding Jesus tells a powerful story of the clash between Islam and Christianity in one man's heart--and of the peace he eventually found in Jesus.

The New York Times bestselling Seeking Allah, Finding Jesus has been expanded to include:
A revised forewordA new afterword by Mark Mittelberg and reflection by Nabeel's wifeAn audiobook exclusive conversation between Nabeel and his close friend and roommate David Wood discussing Nabeel's decision to follow Christ, how his parents found out, and much moreExpert contributions from scholars and ministry leaders on each section of the audiobook included in the audiobook companion PDF download, contributions previously included only in the ebook editionAn appendix included in the audiobook companion PDF download tackling the objection that Ahmadi Muslims are not true Muslims
More information about the audiobook:
Publisher: Zondervan
Published: 2018-08-21
ISBN: 9780310092674
8H 51Min
English
4.68
Category: Religion & Spirituality

No God but One: Allah or Jesus?

The Case for Christ

Faith Is for Weak People: Responding to the Top 20 Objections to the Gospel

The Lamb and the Fuhrer

Seven Days That Divide the World

More Than a Carpenter Today

The Case for Miracles

The Gospel According to Paul

The Gospel According to Jesus

The Way to God