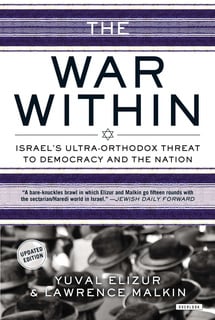 The War Within: Israel's Ultra-Orthodox Threat to Democracy and the Nation

The War Within: Israel's Ultra-Orthodox Threat to Democracy and the Nation

Author: Yuval Elizur, Lawrence Malkin
Format: As e-book
English
For many Israelis, it is the internecine conflict with the ultra-orthodox Haredim that impacts their lives the most. The majority of Haredim -- raised with an intense focus on religion at the expense of all else -- are unemployable in a modern economy. Many choose to pursue religious studies, which the government subsidizes up to the age of 40.

The first book on a conflict that is fast crystallizing into a national debate, The War Within is a lively and trenchant exploration of a battle between church and state as it plays out before our eyes in Israel today. As acclaimed journalists Yuval Elizur and Lawrence Malkin expose, the situation today has reached a critical point that threatens the state of Israel from within and must certainly affect its future.
More info about the ebook
Publisher: Abrams Press
Published: 2014-02-12
ISBN: 9781468310016
English
Category: Religion & Spirituality
Israel

The Modern Jewish Canon: A Journey Through Language and Culture

The Invention of the Land of Israel

Image and Reality of the Israel-Palestine Conflict

The Mossad: The History and Legacy of Israel’s National Intelligence Agency

Building a Bridge: How the Catholic Church and the LGBT Community Can Enter into a Relationship of Respect, Compassion, and Sensitivity

Love in the Void

Mindfulness through the Stars