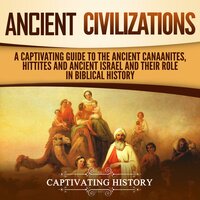 Ancient Civilizations: A Captivating Guide to the Ancient Canaanites, Hittites and Ancient Israel and Their Role in Biblical History

If you want to discover the captivating history of the ancient Canaanites, Hittites and ancient Israelites, then pay attention...

Three captivating manuscripts in one audiobook:

Part 1 of this audiobook includes:

• Revolutionary Findings Provided by Modern Archaeological Detective Techniques
• A Simple Explanation of What Caanan is and Where it's Located
• Fascinating Discoveries of Canaanites Artifacts
• Remarkable Insights into their Government and Social Structure
• Startling Theories About The Bronze Age Collapse
• And much, much more!

In part 2 of this audiobook, you will discover:

Part 3 is covering ancient Israel and in it, you will discover topics such as

• Culture and Society through the Years
• The Late Bronze Age and Early Iron Age
• The Late Iron Age
• The Israelites under Babylon
• The Control of the Persians
• The Hellenistic Period and Judea under the Seleucids
• The Early Hasmonean Dynasty
• And much, much more!

So if you want to learn more about these three ancient civilizations, Listen this audiobook now!