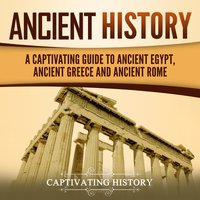 If you want to discover captivating stories of people and events of ancient Egypt, Greece and Rome then pay attention…

Three captivating manuscripts in one audiobook:

Some of the topics covered in part 1 of this audiobook include:

Who Were Ancient Egyptians—Their Origins, History, and GeographyWho Held the Power: The Social Structure of Ancient EgyptKings and their Military PowerThe Magnificent Pharaohs of the New Kingdom and Their EmpireAnd much more!

Some of the topics covered in part 2 of this audiobook include:

Some of the topics covered in part 3 of this audiobook include:

The Seven Kings of Seven Hills: the Foundation of Rome and Its First RulersThe Early RepublicThe Punic Wars and Mediterranean Dominance: The Middle RepublicDecay, Corruption, and Civil Wars: The Late RepublicGaius Julius Caesar, Crossing the Rubicon, and Death that Shook the CityThe Rise of First Roman EmperorAnd much, much more!