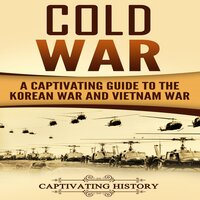 Cold War: A Captivating Guide to the Korean War and Vietnam War

The narrative of the Korean War in the West, and particularly in the United States, tells the tale of a conflict between two global superpowers and competing ideologies in a far-flung corner of the globe.

Some of the topics covered in the first part of this audiobook include:

The Japanese Ascendency: 1910-1945A Korea Divided: The US Occupation of the SouthThe Forging of the North Korean StateFirst Blood: The Outbreak of WarStrike Hard and Strike Fast: The US RetreatBittersweet Victories: American Revival and China’s Decision to Cross the YaluHow Do You Solve a Problem Like China?The Bloody Ceasefire and Looming BombThe Legacy of the Korean WarAnd a Great Deal More that You don't Want to Miss out on!

The Vietnam War represented a watershed not only in American and Vietnamese history but also internationally. It wasn’t just a battle between two nations, but between two ideologies, two military strategies and a fight for the hearts and minds of two vastly different national populations.

Some of the topics covered in the second part of this audiobook include:

The French and the First Indochina War
Out of the Frying Pan, Into the Fire: The Government of Ngo Dinh Diem
Pragmatism and Idealism
The Death of Two Catholic Presidents
Smoke and Mirrors: Johnson’s War
The American War Machine
The Tet NightmareNixon and Kissinger