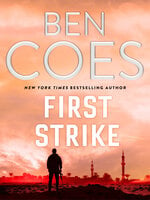 Every hour, someone will be killed.
A top-secret black ops program operates from deep within the Pentagon. The objective: to stop devastating terrorist acts. The means: secretly enabling a hand-picked man, the charismatic Tristan Nazir, to emerge as the most powerful leader in the Middle East. But Nazir double-crosses his superiors, twisting the plan to his own violent ends: the creation of ISIS.

Elite operative Dewey Andreas is sent to Syria to find out more about the enemy. His cover is blown mid-operation and chaos erupts in the streets of Damascus. Trapped and outnumbered, Dewey learns the awful truth – unknown even at the highest levels of office – that ISIS munitions were indeed provided by rogue elements within the U.S. government.

This information arrives in time for the U.S. to cut off a final arms shipment before it reaches terrorist hands. But the vicious Nazir is far from finished. In retaliation he holds the West hostage, launching an audacious strike at the very heart of New York City...