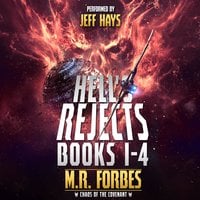 The first four books in the best-selling Chaos of the Covenant series. Over thirty hours of listening! Fans of Guardians of the Galaxy and Star Wars will love the series reviewers describe as “imaginative, pure fun in a great story with great characters, dialogue, action and emotions. ”

When the Earth Republic is savagely attacked, they recruit the universe’s most dangerous minds to retrieve their stolen warships. But as this ragtag group of criminals embarks on a suicide mission to fight for their lives and freedom, an even bigger threat emerges…

The rest of the Chaos of the Covenant Series:

Damned If You Don't

The most powerful starships ever constructed are taken. Thousands are dead. A fleet is in ruins…

Lieutenant Abigail Cage never expected to find herself in Hell. There was a time when she was one of the most respected operatives in the military. Now she's doing hard labor on the most miserable planet in the universe.

The Republic is looking for the most dangerous individuals it can control. The best of the worst, and Abbey is one of them. Joined by the most ragtag collection of criminals the galaxy has to offer, she sets out to recover the ships and take down the traitors who stole them.

There's only one problem…

A new evil is rising in the galaxy. One with a power unlike anything anyone has ever seen. One that's been waiting for this moment for a very, very long time.

And it wants Abbey too.