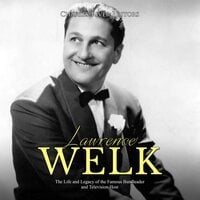 Lawrence Welk: The Life and Legacy of the Famous Bandleader and Television Host

By the mid-20th century, a musical revolution was stirring, and a generation that had not fought in the wars was ready to put the sorrows of the previous 50 years away. Requiring a commentary on modern life all its own, the first post-war generation went for self-expressed rock & roll, with Elvis Presley leading the movement. Jazz, incubated within America, grew into an increasingly sophisticated harmonic and rhythmic language, even though older generations were not able or willing to so easily follow. Not only did the elders’ personal brand of music soothe the wounds of war, but the music reflected the dynamism of a scattered people’s personality, ideals, and customs. From the trains of Woodie Guthrie to the fields of the Russian peasants, each story of suffering, distance, and celebration was played and sung in its own way.

One immigrant son above all others took the step of defying the family farming tradition to participate in his people’s musical remembrance. Lawrence Welk, born in 1903 in Strasburg, North Dakota, dedicated his life’s work to fostering the sounds and steps of a family with its origins in Odessa, Ukraine, and the Alsace-Lorraine region. He began with the unwavering idea that providing uncomplicated and powerfully nostalgic music to members of his heritage would attract a devoted national audience in sympathy with Upper Midwestern ideals. He went on to craft a media culture based on Old World manners and decorum that endured for several decades. Known and loved by the parents and grandparents of the post-war generation, Welk remained impervious to the eye-rolling and mockery from young people and devotees of “sassier” musical fare. Shouldering his accordion, the national instrument of the Russian German presence in the United States, he never attempted to amass a universal audience, but instead held firm to a sliver of like-minded listeners and viewers.