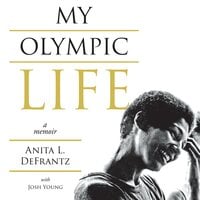 My Olympic Life: A Memoir

Growing up in a family active in promoting civil rights, Anita L. DeFrantz knew the importance of letting her voice be heard as an African American and as a woman. Her activism for individual rights and her ascent as a leader began in earnest at Connecticut College, where she was sophomore class president, chairman of the student judiciary committee her junior year, author of a student bill of rights, and a house fellow, supervising student dorm residents her senior year. At commencement in 1974, she was elected a trustee of the college by her class. Eventually, she would serve as a Connecticut College trustee for 24 years.

In college, DeFrantz found that she was a natural for the new and exciting sport of rowing, with its focus on teamwork. She continued her rowing training throughout law school and during her early career as an attorney. She competed in the 1976 Olympic Games in Montréal, which was the first time women’s rowing was on the program of the Olympic Games, and raced to a bronze medal in the U. S. 8-oared shell with coxswain.

In My Olympic Life, readers will journey with an African-American youngster from racially-charged and segregated Indianapolis in the 1950s and ’60s, who went to a high school with no sports for girls, as she grows up to be a member of the first women’s U. S. Olympic rowing team and wins a bronze medal in the 1976 Montréal Olympic Games. They will then see how her Olympic experience galvanized her to become an active member in national and international sport and Olympic organizations, including becoming the first woman vice president of both FISA (the International Rowing Federation) and the International Olympic Committee. Her story is more than a civil rights and sporting victory for one person. It reveals how with grit, determination and passion, one person can change the game positively for all.