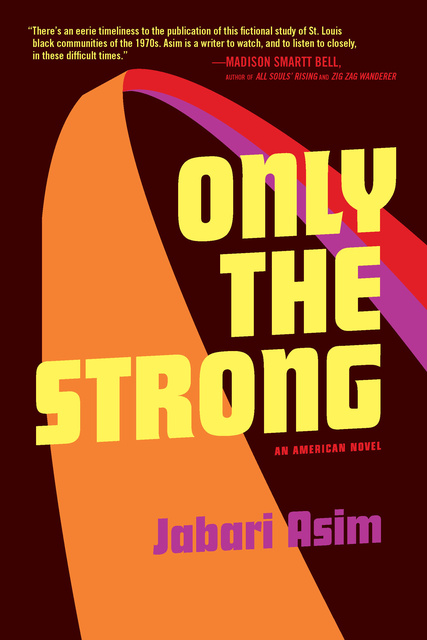 “Asim has given us a book that is at once entertaining and evocative of a moment that truly was a turning point in black and American history. ” —Chicago Tribune

Jabari Asim’s debut novel returns readers to Gateway City, the fictional Midwestern city first explored in his acclaimed short story collection, Taste of Honey. Against a 1970s backdrop of rapid social and political change, Only the Strong portrays the challenges and rewards of love in a quintessential American community where heartbreak and violence are seldom far away.

Moved by the death of Martin Luther King Jr. , Lorenzo “Guts” Tolliver decides to abandon his career as a professional leg-breaker and pursue a life of quiet moments and generous helpings of banana pudding in the company of his new, sensuous lover. His erstwhile boss, local kingpin Ananias Goode, is also thinking about slowing down—but his tempestuous affair with Dr. Artinces Noel, a prominent pediatrician, complicates his retirement plans. Meanwhile, Charlotte Divine, the doctor’s headstrong protégée, struggles with trials of her own.

With prose that’s sharp, humorous, and poetic, Asim skillfully renders a compelling portrait of urban life in the wake of the last major civil-rights bill. Massive change is afoot in America, and these characters have front-row seats.

“Incomparable charisma and verve. ” —The Root, Best Fiction of 2015