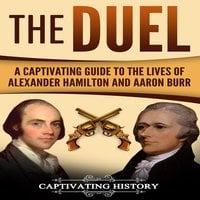 The Duel: A Captivating Guide to the Lives of Alexander Hamilton and Aaron Burr

Alexander Hamilton is one of the most extraordinary figures in American history. A deep thinker, a military leader, and a political dynamo, he was George Washington's right-hand man and perhaps the most important figure in the shaping of the Constitution. His policies and practices in government set the United States down a path of commercial wealth and economic stability. His ideas still resonate in the powerful nation he helped create.

The Second Part of this Audioook Covers Aaron Burr as