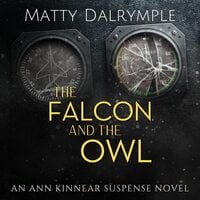 The Falcon and the Owl

A small plane crashes in the Pennsylvania Wilds …

… and only Ann Kinnear has the ability to discover the force that brought it down.

Will the secret the victims carried die with them, or come back to haunt her?

Ann Kinnear is indulging her love of aviation by working toward her pilot’s license at Avondale Airport—and protecting her privacy by discouraging the attentions of a filmmaker intent on documenting her spirit-sensing abilities.

Little does she know that a fiery plane crash in the Pennsylvania Wilds will embroil her in a race to track down a contract on which two rivals are banking their futures. And when airshow pilot Gwen Burridge launches a smear campaign against Ann, she is even more determined to uncover the truth.

Ann travels to the crash site and learns what brought the plane down—but it’s only part of the story.

Will Ann land safely, or be the latest victim of a secret someone is willing to kill to keep?

Find out now in Book 3 of the Ann Kinnear Suspense Novels!

Even like the deed that's done. On Tuesday last,

A falcon, towering in her pride of place,

Was by a mousing owl hawk'd at and kill'd.