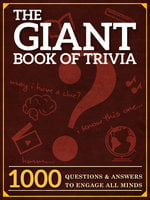 The Giant Book of Trivia: 1000 Questions and Answers to Engage All Minds

The Giant Book of Trivia: 1000 Questions and Answers to Engage all Minds; picks up right where The Great Book of Trivia left off! Once again, we’ve brought together a host of fresh and intriguing questions that will test the limits of your knowledge across a huge range of subjects.
The book is divided into 4 parts:
Part 1 presents 50 challenging general knowledge quizzes.
Part 2 introduces the “specialist rounds” at three levels of difficulty: medium, challenging and fiendish. Here you’ll find questions on geography, history, sport, science and nature, literature, art and architecture, and movies and TV.
Part 3 brings a lighter touch with a selection of “bonus round” quizzes, where you’ll be asked to spot connections, identify years from a series of clues, unravel proverbs, and sort out lists of famous people, places and things.
Part 4 contains 20 “family fun” quizzes that will be especially enjoyable for younger minds. There are straightforward general knowledge questions, alongside rhyming and alphabet quizzes.

At Elsinore Books we pride ourselves on creating beautiful e-Books, and devote great attention to formatting, and ease of navigation. This book contains a cleanly-styled contents page that permits easy movement between quizzes. Each quiz occupies its own chapter, so you can move between quizzes by pressing a single button on your e-reader.
You can access the answers to each quiz by following the links at the top and bottom of the question page. On the answer pages you’ll find each question rewritten and followed by its answer in bold.

You can view a full listing of the games inside by clicking on the preview of this book and viewing the contents page. Some of the collection highlights are outlined below:

1. Who wears the Ring of the Fisherman?
2. What are the six official languages of the United Nations?
3. What became the official motto of the United States in 1956?
4. In which layer of Earth’s atmosphere do nearly all weather conditions take place?
5. What is Iceland’s only native land mammal?
6. Who composed the soundtracks for Iron Man, Game of Thrones, and Westworld?
7. What is the first drink ordered by James Bond in the first novel of the book series?
8. Which US city will host the 2028 Summer Olympics?
9. How many characters do the numbers from zero to nine each have in Morse code?
10. In Greek mythology, who was the keeper of the winds?

1. Which city is divided into Asian and European parts by the Bosporus?
2. What are the five boroughs of New York?
3. Which country is divided into 26 cantons?
4. The Tropic of Capricorn is also known as the “Northern Tropic”. True or False?
5. What prefix has been conferred to the English towns of Tunbridge Wells, Leamington Spa, and Wootton Basset?
6. What is the name of the archipelago which includes Mallorca, Menorca, Ibiza, and Formentera?
7. What is the largest and second most populous state of Germany?
8. What is the largest of the Channel Islands?
9. In which country is the Massif Central highland region?
10. Which city is home to Croke Park stadium?

1. Which Frenchman lost his sight in a childhood accident and went on to develop a writing system for people who are visually impaired?
2. Sir Galahad, Sir Bors, and Sir Percival attained which legendary object?
3. Coturnix coturnix is the Latin name for which ground-nesting bird?
4. In humans, which gender has two different kinds of sex chromosomes?
5. Which famous cabinet-maker was born in Yorkshire in 1718?
6. Complete the quote from Percy Bysshe Shelley: “A poet is a ___________ who sits in darkness and sings to cheer its own solitude…”
7. Which actor has portrayed Moses, Melvin Purvis, Michael Burry, and Dicky Eklund?
8. What is the most common sedimentary rock?
9. In computing and graphic design, what is the term for a reduced-size image that represents a larger one?