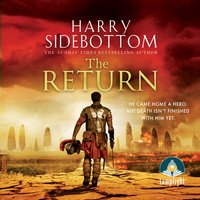 He came home a hero.
But death isn't finished with him yet …

145BC - CALABRIA, ANCIENT ROME. After years of spilling blood for Rome, Gaius Furius Paullus has returned home to spend his remaining days working quietly on the family farm.

But it seems death has stalked Paullus from the battlefield. Just days after his arrival, bodies start appearing - murdered and mutilated. And as the deaths stack up, and panic spreads, the war hero becomes the prime suspect. After all, Paullus has killed countless enemies on the battlefield - could he have brought his habit home with him?

With the psychological effects of combat clouding every thought, Paullus must use all his soldier's instincts to hunt the real killer. Because if they are not brought to justice soon, he may become the next victim.

THE RETURN is the breathless, epic new thriller from one of the world's best historical novelists - for fans of Simon Scarrow, Conn Iggulden, Ben Kane and Bernard Cornwell.

'An extraordinarily vivid take on the ancient world' - EVENING STANDARD

'Absorbing, rich in detail and brilliant' - THE TIMES