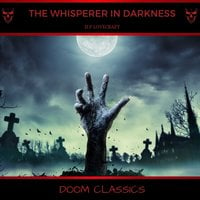 The Whisperer in Darkness

The story is told by Albert N. Wilmarth, an instructor of literature at Miskatonic University in Arkham. When local newspapers report strange things seen floating in rivers during a historic Vermont flood, Wilmarth becomes embroiled in a controversy about the reality and significance of the sightings, though he sides with the skeptics. Wilmarth uncovers old legends about monsters living in the uninhabited hills who abduct people who venture or settle too close to their territory.

Howard Phillips Lovecraft was an American author of fantasy, horror and science fiction. He is notable for blending elements of science fiction and horror; and for popularizing "cosmic horror" the notion that some concepts, entities or experiences are barely comprehensible to human minds, and those who delve into such risk their sanity.

Lovecraft has become a cult figure in the horror genre and is noted as creator of the "Cthulhu Mythos," a series of loosely interconnected fictions featuring a "pantheon" of nonhuman creatures, as well as the famed Necronomicon, a grimoire of magical rites and forbidden lore. His works typically had a tone of "cosmic pessimism," regarding mankind as insignificant and powerless in the universe. Lovecraft's readership was limited during his life, and his works, particularly early in his career, have been criticized as occasionally ponderous, and for their uneven quality. Nevertheless, Lovecraft's reputation has grown tremendously over the decades, and he is now commonly regarded as one of the most important horror writers of the 20th Century, exerting an influence that is widespread, though often indirect