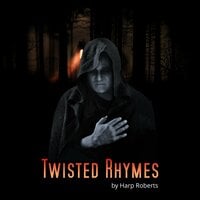 SIRUS/XM: "These tales play like movies in your mind" "Hollywood Caliber Production!"

Cobwebs & Candlelight: A woman's ghost haunts an 1860s country house. A horseman arrives and attempts to relieve her tortured soul. 5:46

Patient #9: A woman's car dies in a dark forest. She seeks help at the only house nearby but soon discovers it's abandoned, or is it? 3:57

When The Full Moon Comes Rising: A medieval woman, turned witch, avenges the unjust killing of her husband with the help of a ghastly cadre of the living dead. 7:05

Captain MacKnee: A sea captain shares a secret with his mate that has haunted him for years and may just be the death of him. 3:15

Musical Murder Mystery: New York City musicians are being murdered and a detective is puzzled by a repetitive, musical clue. 4:22

In Laredo, 1857: A dying man arrives on horseback in the dead of night and the town marshal soon discovers why. 4:18

Cup a' Joe: A drowsy, traveling salesman stops by a roadside diner for a cup a' joe. He soon senses impending danger and acts fast to hide his fear. 4:34

And Nothing More: A retired cop tries debunking tales of ghosts at an Irish bed & breakfast. 9:32