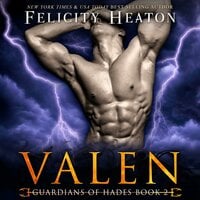 Prince of the Underworld and Lord of Lightning, Valen was banished from his home by his father, Hades, two centuries ago and given a new duty and purpose—to keep our world and his from colliding in a calamity foreseen by the Moirai.

Together with his six brothers, he fights to defend the gates to the Underworld from daemons bent on breaching them and gaining entrance to that forbidden land, striving to protect his home from their dark influence. Cursed by Zeus to never know love again, Valen has brought up barriers around his heart to protect it, but with each new barrier he creates, the dark hold his power has over him grows, becoming all he needs.

Until the night he finally crosses paths with the assassin who has been watching him from the shadows, a bewitching mortal possessing the name of an angel and the skills of a devil—a woman who awakens his passionate heart and stirs dangerous desires.

Eva has built a fearsome reputation for herself in Italy’s underworld, but her latest job in her beloved city of Rome has left her feeling that she has stepped into a dangerous world and this mission might end in her death—either at the hands of her mysteriously seductive client or by the blade of the wickedly alluring warrior who is her target.

As the threat from the daemons escalates and more than just the Rome gate becomes their target, will Valen be strong enough to face the fears in his heart and the ghosts of his past to claim everything he desires or will they lure him deeper under their spell and into the darkness?