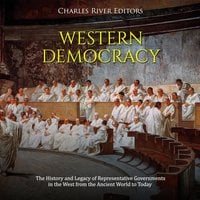 Western Democracy: The History and Legacy of Representative Governments in the West from the Ancient World to Today

In today’s modern world every political regime, even the most authoritarian or repressive, describes itself as democracy or a Democratic People’s Republic. The concept of rule by the people, on behalf of the people, has come to be accepted as the norm, and very few would overtly espouse the cause of dictatorship, absolute monarchy or oligarchy as the most desirable political system upon which to base the government of any country.

It is also generally accepted that democracy, as a political ideology, began in Greece, specifically in Athens, in the 7th century BCE and reached its zenith in the 5th century under the leadership of Pericles. Dating an exact starting point is impossible, but at the beginning of the 7th century BCE, Solon inaugurated a series of reforms that began the movement away from rule by individuals, or tyrants, and by the end of that century the reforms of Cleisthenes provided the basis of the Athenian democratic system that culminated in the radical institutions introduced by Ephialtes and Pericles in the 5th century. The result was the first, and possibly only, truly participative democratic state.

The Greeks and Romans would not have recognized, or accepted, any of today’s modern versions of democracy as being truly “democratic. ” A rejection of dictatorships masquerading as democracies would be understandable, but the ancients would have been equally scathing of Western-style representative democracies that they would undoubtedly have seen as anti-democratic. The key to democracy, as far as the Greeks and Romans were concerned, was active participation by the citizen body in all political aspects of life.