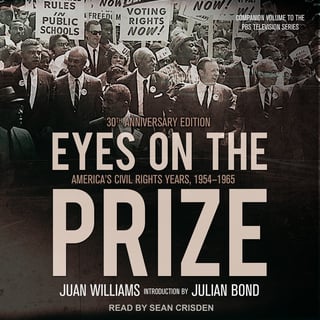 Автор: Juan Williams
Разказвач: Sean Crisden
Формат: Aудиокнига
11ч. 5мин.
Английски
5
From the Montgomery bus boycott to the Little Rock Nine to the Selma-Montgomery march, thousands of ordinary people who participated in the American civil rights movement; their stories are told in Eyes on the Prize.

From leaders such as Martin Luther King, Jr., to lesser-known figures such as Barbara Rose John and Jim Zwerg, each man and woman made the decision that something had to be done to stop discrimination. These moving accounts of the first decade of the civil rights movement are a tribute to the people, black and white, who took part in the fight for justice and the struggle they endured.
Повече информация за аудиокнигата
Издателство: Tantor Audio
Публикувана: 2018-07-03
ISBN: 9781977370006
11ч. 5мин.
Английски
5
Категория: История
История Културна история

Driving While Black: African American Travel and the Road to Civil Rights