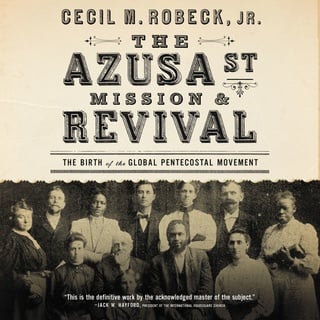 The Azusa Street Mission and Revival

The Azusa Street Mission and Revival

From humble beginnings with few resources, this small uniquely diverse and inclusive congregation led by William J. Seymour ignited a fire that quickly grew into a blaze and spread across the world giving rise to the global Pentecostal movement. Sifting through newspaper reports and other written accounts of the time as well as the mission’s own publications, and through personal interaction with some of those blessed to stand very near to the fire that began at the mission, Cecil M. Robeck, Jr. relates not only the historical significance of the revival but also captures the movement of the Holy Spirit that changed the face of modern Christianity.
Повече информация за аудиокнигата
Издателство: Thomas Nelson
Публикувана: 2017-07-25
ISBN: 9780785219248
13ч. 20мин.
Английски
5
Категория: Религия
Християнство

Voice of a Prophet

Under Cover: Why Your Response to Leadership Determines Your Future

The Fear of God

The Me I Want to Be