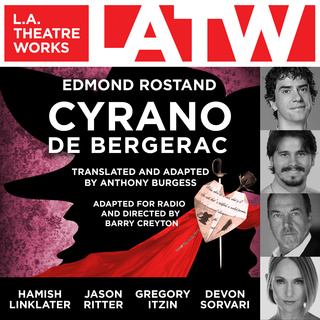 Автор: Anthony Burgess, Edmond Rostand
Разказвач: Devon Sorvari, Hugo Armstrong, Gregory Itzin, Jason Ritter, André Sogliuzzo, Anna Mathias, Matthew Wolf, Caroline Aaron, Hamish Linklater, Morgan Ritchie, Kalen Harriman
Формат: Aудиокнига
1ч. 58мин.
Английски
4,14
One of the most enduring love stories of all time. Cyrano de Bergerac is the Platonic ideal of the fearless warrior who is paralyzed by romantic yearning. Confident in battle, but relentlessly self-doubting in love, Cyrano is unable to express his devotion to the beautiful Roxane. And when she falls in love with a handsome young cadet named Christian, Cyrano seizes the opportunity to use Christian as a proxy for his own unrequited feelings. Written by Edmond Rostand, translated and adapted by Anthony Burgess.

Includes a conversation with Sue Lloyd, author of The Man Who Was Cyrano: A Life of Edmond Rostand.