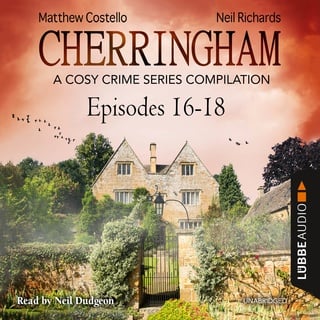 Автор: Matthew Costello, Neil Richards
Разказвач: Neil Dudgeon
Формат: Aудиокнига
7ч. 52мин.
Английски
3,86
Set in the sleepy English village of Cherringham, this cozy detective series brings together an unlikely sleuthing duo: English web designer Sarah and American ex-cop Jack. Each of the self-contained episodes is a quick listen for the morning commute, while waiting for the doctor, or when curling up with a hot cuppa.

When amiable old village eccentric Quentin Andrews dies, the good folk of Cherringham are astonished at the crowd that turns up for his funeral. But even more astonished are the beneficiaries of his will: Quentin has left a veritable fortune to whomever is the first who can solve an intricate “Cherringham crossword.” That puzzle is only the first of many that Jack and Sarah will uncover as they follow the treasure hunt for clues and learn the truth about who Quentin Andrews really was—and the biggest mystery of them all: Was he in fact murdered?

When a big movie production comes to Cherringham, complete with lords, ladies, and flashing swords, the whole village is abuzz with excitement. But when a series of dangerous accidents threatens the life of the young lead, Zoe Harding, Sarah and Jack get involved. Are these really accidents? Or could they be something more sinister—even deadly? Who is trying to destroy the career of the beautiful young star, and why?

When an American tourist goes missing in Cherringham, the local police don’t see reason for concern—people often wander away from such tours. But when that tourist’s sister shows up from New York, desperately looking for answers, Jack and Sarah become convinced there’s more to the disappearance than meets the eye. Soon they are entangled in a mystery with a secret history of betrayal, sacrifice, dishonor, and death.
Повече информация за аудиокнигата
Издателство: Lubbe
Публикувана: 2018-11-06
ISBN: 9781982560997
7ч. 52мин.
Английски
3,86
Категория: Криминални

Dead in the Water: A Cherringham Mystery

The Curse of Arundel Hall

Revenge of the Wrought-Iron Flamingos

Murder in an Irish Cottage

Murder at the Old Abbey

Aunt Dimity and the Heart of Gold

Tangled Up in Tinsel