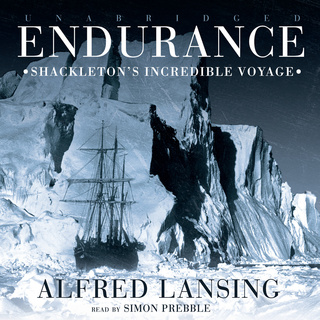 Автор: Alfred Lansing
Разказвач: Simon Prebble
Формат: Aудиокнига
10ч. 21мин.
Английски
4,51
This is a new reading of the thrilling account of one of the most astonishing feats of exploration and human courage ever recorded.

In August of 1914, the British ship Endurance set sail for the South Atlantic. In October, 1915, still half a continent away from its intended base, the ship was trapped, then crushed in the ice. For five months, Sir Ernest Shackleton and his men, drifting on ice packs, were castaways in one of the most savage regions of the world.

Lansing describes how the men survived a 1,000-mile voyage in an open boat across the stormiest ocean in the world and an overland trek through forbidding glaciers and mountains. The book recounts a harrowing adventure, but ultimately it is the nobility of these men and their indefatigable will that shines through.
Повече информация за аудиокнигата
Издателство: Blackstone Publishing
Публикувана: 2008-01-01
ISBN: 9781481582568
10ч. 21мин.
Английски
4,51
Категория: Биографии

An Empire of Ice: Scott, Shackleton, and the Heroic Age of Antarctic Science

The Worst Journey in the World

A Night to Remember

To the Edges of the Earth

Island of the Lost: Shipwrecked at the Edge of the World