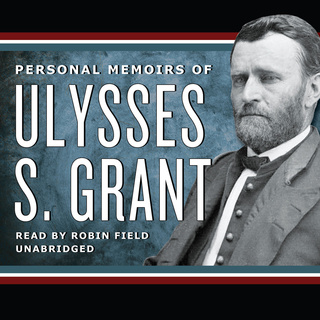 Автор: Ulysses S. Grant
Разказвач: Robin Field
Формат: Aудиокнига
29ч. 34мин.
Английски
4,75
Among the autobiographies of great military figures, Ulysses S. Grant’s is certainly one of the finest, and it is arguably the most notable literary achievement of any American president: a lucid, compelling, and brutally honest chronicle of triumph and failure. From his frontier boyhood, to his heroics in battle, to the grinding poverty from which the Civil War ironically rescued him, these memoirs are a mesmerizing, deeply moving account of a brilliant man told with great courage as he reflects on the fortunes that shaped his life and his character. Written under excruciating circumstances—Grant was dying of throat cancer—and encouraged and edited from its very inception by Mark Twain, it is a triumph of the art of autobiography.

Grant was sick and broke when he began work on his memoirs. Driven by financial worries and a desire to provide for his wife, he wrote diligently during a year of deteriorating health. He vowed he would finish the work before he died, and one week after its completion, he lay dead at the age of sixty-three.

Publication of the memoirs came at a time when the public was being treated to a spate of wartime reminiscences, many of them defensive in nature, seeking to refight battles or attack old enemies. Grant’s penetrating and stately work reveals a nobility of spirit and an innate grasp of the important facts, which he rarely displayed in private life. He writes in his preface that he took up the task “with a sincere desire to avoid doing injustice to anyone, whether on the National or the Confederate side.”
Повече информация за аудиокнигата
Издателство: Blackstone Publishing
Публикувана: 2010-11-10
ISBN: 9781483090207
29ч. 34мин.
Английски
4,75
Категория: Биографии

Four Years in the Stonewall Brigade

Team of Rivals: The Political Genius of Abraham Lincoln

Braxton Bragg: The Most Hated Man of the Confederacy

Rebel Yell: The Violence, Passion and Redemption of Stonewall Jackson