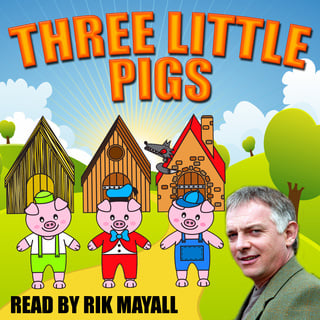 Автор: Joseph Jacobs, Mike Bennett
Разказвач: Rik Mayall
Формат: Aудиокнига
13мин.
Английски
4,4
Enjoy this fantastic edition of The Three Little Pigs, read by the brilliant comedian, writer and actor Rik Mayall. Adapted by the renowned producer Mike Bennett, this delightful retelling of a classic tale will have you captivated from start to finish.

The late, great Richard "Rik" Mayall was a pioneer of alternative comedy in the '80s, who formed a famous comedy partnership with Ade Edmondson, and featured in numerous cult classic sitcoms, including The Young Ones, Bottom, Blackadder, and Guest House Paradiso, among others. On 9th June 2014, at the age of 56, a massive blow was dealt to the world of comedy, as Rik passed away.
Повече информация за аудиокнигата
Издателство: One Media iP LTD
Публикувана: 2017-12-06
ISBN: 9781509485161
13мин.
Английски
4,4
Категория: За деца
3-6 години

Jack and the Beanstalk

Pete the Cat: Pete at the Beach

Pete the Cat and the Perfect Pizza Party