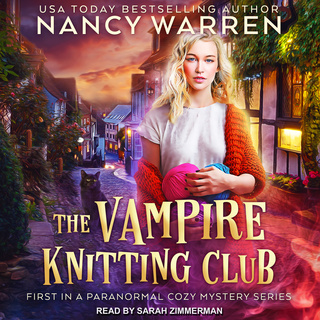 Автор: Nancy Warren
Разказвач: Sarah Zimmerman
Формат: Aудиокнига
6ч. 6мин.
Английски
3,97
At a crossroads between a cringe-worthy past (Todd the Toad) and an uncertain future (she's not exactly homeless, but it's close), Lucy Swift travels to Oxford to visit her grandmother. With Gran's undying love to count on and Cardinal Woolsey's, Gran's knitting shop, to keep her busy, Lucy can catch her breath and figure out what she's going to do.

Except it turns out that Gran is the undying. Or at least, the undead. But there's a death certificate. And a will, leaving the knitting shop to Lucy. And a lot of people going in and out who never use the door-including Gran, who is just as loving as ever, and prone to knitting sweaters at warp speed, late at night. What exactly is going on?

When Lucy discovers that Gran did not die peacefully in her sleep, but was murdered, she has to bring the killer to justice without tipping off the law that there's no body in the grave. Between a hot 500-year-old vampire and a dishy detective inspector, both of whom always seem to be there for her, Lucy finds her life getting more complicated than a triple cable cardigan. The only one who seems to know what's going on is her cat . . . or is it . . . her familiar?
Повече информация за аудиокнигата
Издателство: Tantor Audio
Публикувана: 2019-06-11
ISBN: 9781977349880
6ч. 6мин.
Английски
3,97
Категория: Криминални
Поредица: Vampire Knitting Club: 1