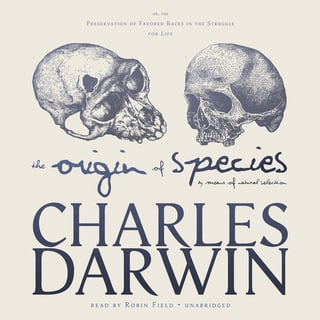 Автор: Charles Darwin
Разказвач: Robin Field
Формат: Aудиокнига
23ч. 9мин.
Английски
3,88
The Origin of Species sold out on the first day of its publication in 1859. It is the major book of the nineteenth century and one of the most readable and accessible of the great revolutionary works of the scientific imagination. Though, in fact, little read, most people know what it says—at least they think they do.

The Origin of Species was the first mature and persuasive work to explain how species change through the process of natural selection. Upon its publication, the book began to transform attitudes about society and religion and was soon used to justify the philosophies of communists, socialists, capitalists, and even Germany’s National Socialists. But the most quoted response came from Thomas Henry Huxley, Darwin’s friend and also a renowned naturalist, who exclaimed, “How extremely stupid not to have thought of that!”
Повече информация за аудиокнигата
Издателство: Blackstone Publishing
Публикувана: 2011-09-30
ISBN: 9781483090443
23ч. 9мин.
Английски
3,88
Категория: История
История Нашите любими книги Най-продавани на английски

Why Buddhism is True: The Science and Philosophy of Enlightenment

A Brief History of Creation

The Ends of the World

The Greatest Show on Earth: The Evidence for Evolution

Cro-Magnon: How the Ice Age Gave Birth to the First Modern Humans

The Origin of Species

River Out of Eden