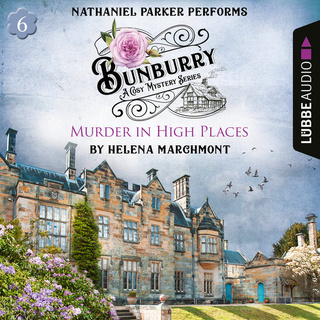 In "Murder in High Places", the sixth Bunburry book, Oscar will brave the Cotswolds for the first time! Alfie has tried for months to convince his best friend to visit him - but when a glamorous High Society Party in honour of celebrated actor Dorian Stevens is announced, Oscar just can't resist. He is - after all - Dorian's greatest fan and can't wait to meet his hero. But the evening at the lovely Saville mansion takes a murderous turn ...

Nathaniel Parker, born in 1962, graduated from the London Academy of Music and Dramatic Art and went on to join the Royal Shakespeare Company. His television career began in 1988 when he played Flying Officer 'Flash' Gordon in the LWT mini-series Piece of Cake. He is also the lead in the BBC series Inspector Lynley Mysteries, based on the novels by Elizabeth George. Nathaniel Parker has an extensive list of audio books to his credit, ranging from the classics of Charles Dickens and Thomas Hardy to more modern writings and children's books.
Повече информация за аудиокнигата
Издателство: Lübbe Audio
Публикувана: 2019-09-30
ISBN: 9783838793054
2ч. 36мин.
Английски
4,14
Категория: Криминални
Поредица: Bunburry: 6

The Curse of Arundel Hall

Dead in the Water: A Cherringham Mystery

Murder in an Irish Cottage

Murder at the Old Abbey

A Crafter Knits a Clue

Aunt Dimity and the Heart of Gold

Revenge of the Wrought-Iron Flamingos

A Crafter Quilts a Crime

A Crafter Hooks a Killer

Eggs in a Casket