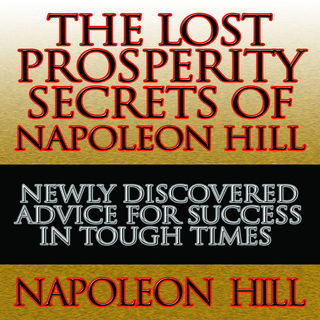 The Lost Prosperity Secrets of Napoleon Hill consists of a series of magazine articles Napoleon Hill wrote between 1919 and 1923 for Success Magazine, for which he eventually became an editor. Hill's drive to become successful led him from the poverty stricken Appalachian Mountains to meetings with rags-to-riches tycoons. These articles focus on Hill's philosophy of success. Drawing upon the thoughts and experiences of a multitude of influential people, Hill shows listeners how those successful people achieved their status. Many of these writings have been the basis of several bestselling books. Listeners will discover principles designed to guide them in putting these steps to success into action.

It is in these early articles that Hill honed his theories, refined his arguments, and polished his presentation of the success philosophy for the ordinary person.

A necessary handbook for our era, The Lost Prosperity Secrets of Napoleon Hill is filled with time-tested wisdom that resonates as strongly and as appropriate today as when it was first written.
Editorial: Gildan Media
Publicado: 2010-11-08
ISBN: 9781596596405
5H 34M
Inglés
4,13
Categoría: Crecimiento personal
Economía

Kiss That Frog: 21 Ways to Turn Negatives into Positives

Focal Point: A Proven System to Simplify Your Life, Double Your Productivity, and Achieve All Your Goals

No More Mr. Nice Guy: A Proven Plan for Getting What You Want in Love, Sex and Life (Updated)

The Winner's Brain: 8 Strategies Great Minds Use to Achieve Success

The 7 Power Principles for Success

The Magic Ladder to Success: The Wealth-Builder's Concise Guide to Winning!

Crunch Point: The 21 Secrets to Succeeding When It Matters Most

The Power of Decision: A Step-by-Step Program to Overcome Indecision and Live Without Failure Forever

It's Not About the Money

Communicate What You Think

Promote Yourself and Me 2.0

The Power of Self-Confidence: Become Unstoppable, Irresistible, and Unafraid in Every Area of Your Life

Unshakeable: How to Thrive (Not Just Survive) in the Coming Financial Correction

How to Be Everything

25 Things to Say to the Interviewer, to Get the Job You Want + How to Get a Promotion

The Law of Success