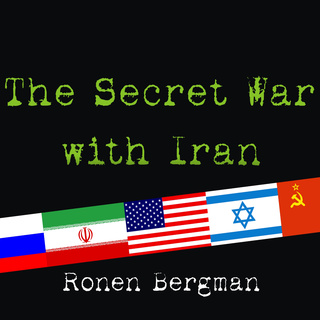 The Secret War With Iran

The Secret War With Iran

Autor: Ronen Bergman
Narrador: Dick Hill
Formato: Audiolibro
17H 13M
Inglés
3,59
In the years since 9/11, the U.S. war on terror has focused on al-Qaeda, Afghanistan, and Iraq. Coverage of Iran has been devoted almost exclusively to its nuclear ambitions. Yet, as Ronen Bergman's groundbreaking reporting in this vital investigative history reveals, for thirty years, Iran has been the world's leading sponsor of global terror and stands as the most formidable sponsor of terror in the world today.

Bergman, one of Israel's top investigative reporters, gained unprecedented access to extraordinary sources from top to bottom in the Mossad and intelligence agencies around the world. Based on over ten years of research and more than 300 exclusive interviews with key intelligence figures, he reveals that Iranian terrorist masterminds have crisscrossed the globe, conducting bombings and assassinations with impunity-even renting apartments and planning bombing attacks in New York City. Iran's proxy, Hizballah, has virtually taken over southern Lebanon and threatens Israel with high-powered weaponry supplied by Iran. Iran and Hizballah worked closely with al-Qaeda and other Sunni terrorist groups in developing their terrorist operations, and Iranian commandos trained Iraqi insurgents in the crafts of suicide bombing and the building of the roadside bombs that have killed so many U.S. troops in Iraq.

In response, and largely beneath the public's radar, a vast clandestine war has been fought with Iran and Hizballah on one side and the CIA, Israel's Mossad, and their European counterparts on the other. The full story of that secret war, told for the first time here, will fundamentally change the debate about U.S. national security priorities.

A new axis of evil is emerging from Iran and spreading around the world, and Bergman shows that the CIA and the Mossad have so far been unable to thwart it. The Secret War with Iran is riveting and urgent.
Editorial: Tantor Audio
Publicado: 2008-11-11
ISBN: 9781400179824
17H 13M
Inglés
3,59
Categoría: Historia
Relaciones internacionales y globalización

The Secret War with Iran: The 30-Year Clandestine Struggle Against the World's Most Dangerous Terrorist Power

Hunting the Caliphate: America's War on ISIS and the Dawn of the Strike Cell

Putin’s People: How the KGB Took Back Russia and then Took on the West

Shadow State: Murder, Mayhem, and Russia's Remaking of the West

The CIA as Organized Crime

Russians Among Us: Sleeper Cells, Ghost Stories, and the Hunt for Putin’s Spies