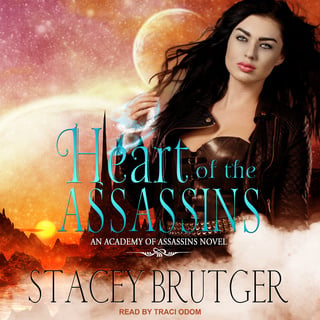 Heart of the Assassins

Heart of the Assassins

Autor: Stacey Brutger
Narrador: Traci Odom
Formato: Audiolibro
9H 49M
Inglés
4,3
Morgan has been banned from hunting until she learns to control her powers and her impulsive nature. Her team is so focused on her training, she feels more alone and alienated than ever. She must make the heartbreaking decision to stay and fight for the men who mean everything to her or turn her back on the Academy to survive.

But the choice is taken from her when the Academy is viciously attacked, and Morgan is abducted and dumped into the Primordial Realm. Abandoned and unable to get back to the Academy, Morgan must take a crash course in survival in this alien world. As she investigates the deadly mist sweeping through the Realm, she is horrified to discover that her team has followed her, determined to earn back her trust.

With their lives in danger, Morgan will do whatever it takes to save them, even if it means entering Tartarus and uncovering the secrets of the forgotten gods. With the cure in hand, they must defeat monsters from myths and legends-and their worst nightmares-and escape the gates of hell, or risk becoming forever trapped and forced to watch the destruction of their world.

For King and Corruption

So Dark the Night

Twisted is the Crown