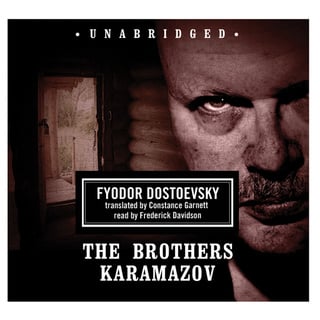 Autor: Fyodor Dostoevsky, Fyodor Dostoyevsky
Narrador: Frederick Davidson
Formato: Audiolibro & Libro electrónico
34H 44M
Inglés
3,77
After spending four years in a Siberian penal settlement, during which time he underwent a religious conversion, Dostoevsky developed a keen ability for deep character analysis. In The Brothers Karamazov, he explores human nature at its most loathsome and cruel but never flinches at what he finds.

The Brothers Karamazov tells the stirring tale of four brothers: the pleasure-seeking, impatient Dmitri; the brilliant and morose Ivan; the gentle, loving, and honest Alyosha; and the illegitimate Smerdyakov: shy, silent, and cruel. The four unite in the murder of one of literature’s most despicable characters—their father. While on the surface a story about patricide, this novel is, on a deeper level, a spiritual tale of the struggle between faith, doubt, reason, and free will.