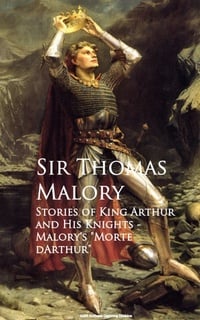 Autor: Sir Thomas Malory
Formato: Libro electrónico
Inglés
Among the best liked stories of five or six hundred years ago were those which told of chivalrous deeds—of joust and tourney and knightly adventure. To be sure, these stories were not set forth in printed books, for there were no printed books as early as the times of the first three King Edwards, and few people could have read them if there had been any. But children and grown people alike were eager to hear these old-time tales read or recited by the minstrels, and the interest in them has continued in some measure through all the changing years and tastes. We now, in the times of the seventh King Edward, still find them far more worth our while than many modern stories. For us they have a special interest, because of home setting and Christian basis, and they may well share in our attention with the legends of Greece and Rome.

In these early romances of chivalry, Arthur and his knights of the Round Table are by far the most popular heroes, and the finding of the Holy Grail is the highest achievement of knightly valour. The material for the Arthur stories came from many countries and from many different periods of history. Much of it is wholly fanciful, but the writers connected all the incidents directly or indirectly with the old Briton king of the fifth century, who was the model of knighthood, "without fear and without reproach."...
Editorial: anboco
Publicado: 2016-09-09
ISBN: 9783736414266
Inglés
Categoría: Clásicos

Ancient Monuments of the Mississippi Valley

Hung Lou Meng, or, the Dream of the Red Chamber

The Prairie: A Tale

The Bride Of Lammermoor

The Way of an Indian (Western Classic)

The Huron: Pupil of Nature

Deerfoot in The Mountains

The Maid of Orleans: A Tragedy