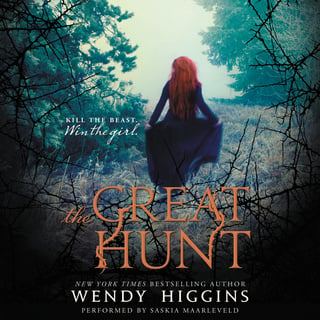 When a monstrous beast attacks in Eurona, desperate measures must be taken. The king sends a proclamation to the best and bravest hunters: whoever kills the creature will win the hand of his daughter Princess Aerity as a reward. The princess recognizes her duty but cannot bear the idea of marrying a stranger—she was meant to marry for love—until a brooding local hunter, Paxton Seabolt, catches her attention. And while there’s no denying the fiery chemistry between them, Princess Aerity feels that Paxton’s mysteriousness is foreboding, maybe even dangerous.

Paxton is not the marrying type. Nor does he care much for spoiled royals and their arcane laws. He is determined to keep his focus on the task at hand—ridding the kingdom of the beast—but the princess continues to surprise him, and the secrets he’s buried begin to surface against his wishes.
Lisätietoa äänikirjasta:
Julkaisija: HarperCollins
Julkaisuvuosi: 2016-03-08
ISBN: 9780062448217
9T
Englanti
3,99
Kategoria: Nuoret
Satuklassikot