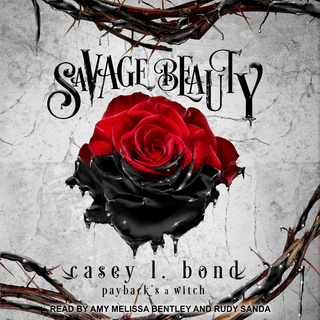 Kirjailija: Casey L. Bond
Lukija: Amy Melissa Bentley, Rudy Sanda
Formaatti: Saatavilla äänikirjana
8T 17M
Englanti
3,8
Once upon a time, a beautiful queen was cursed by a dark faery. That curse, inherited by twin princesses, Aura and Luna, binds their lives in the strangest of ways. At an early age, the girls were more than sisters. They were the strongest of allies until a combination of jealousy, anger and dark magic tore their relationship to shreds.

Aura took everything from Luna: her home, her family, and her love by murdering the prince who'd chosen her instead of Aura.

Luna wants revenge, but she's running out of time. She must sever the magical bond tying her life to Aura's before their eighteenth birthday or be bound to her forever. In desperation, she seeks help from a dark fae prince, but the price is steep-a piece of her soul.

Fate is a real witch. Luna was willing to give up anything to stop her sister, until Prince Phillip of Grithim, the brother of the only man she's ever loved, falls into her life. Neither of them can fight their attraction, despite their guilt.

With Aura hell-bent on destroying everything she holds dear, Luna must decide whether she wants revenge or Phillip. She can't have both, and in the end, this may be a battle both sisters lose.
Lisätietoa äänikirjasta:
Julkaisija: Tantor Audio
Julkaisuvuosi: 2018-09-19
ISBN: 9781541445147
8T 17M
Englanti
3,8
Kategoria: Nuoret
Satuklassikot