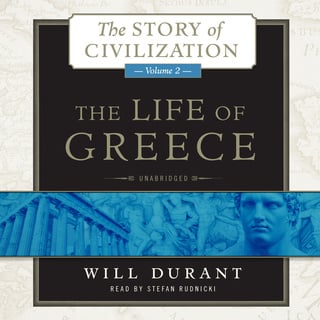 Author: Will Durant
Narrator: Stefan Rudnicki
Format: As audiobook &
32H 36Min
English
4.27
The second volume of Will Durant’s Pulitzer Prize–winning series, The Life of Greece: The Story of Civilization, Volume2 chronicles the history of ancient Greek civilization. Here Durant tells the whole story of Greece, from the days of Crete’s vast Aegean empire to the final extirpation of the last remnants of Greek liberty, crushed under the heel of an implacably forward-marching Rome. The dry minutiae of battles and sieges, of tortuous statecraft of tyrant and king, get the minor emphasis in what is preeminentlya vivid recreation of Greek culture, brought to the reader through the medium of supple, vigorous prose.

In this masterful work, readers will learn about:

• the siege of Troy
• the great city-states of Athens and Sparta
• the heroes of Homer’s epics
• the gods and lesser deities of Mount Olympus
• the teachings of Socrates, Plato, and Aristotle
• the life of Alexander the Great
More information about the audiobook:
Publisher: Blackstone Publishing
Published: 2013-11-15
ISBN: 9781483087368
32H 36Min
English
4.27
Category: History
Series: Story of Civilization: 2
History Cultural History

The Riddle of the Labyrinth: The Quest to Crack an Ancient Code

The Lost Empire of Atlantis