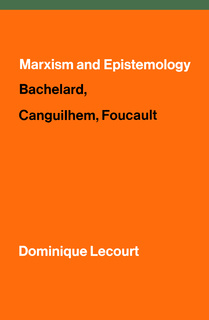 Author: Dominique Lecourt
Format: E-book
English
When this book was first published in English in 1975, the previous forty years had seen the emergence of a new tradition in the philosophy of the sciences, or 'epistemology' in France. The founder of this tradition was Gaston Bachelard. Rather than elaborating from existing philosophy a series of categories to judge science's claims to truth, Bachelard started from the twentieth-century revolution in physics and critically examined existing philosophy on the basis of the achievements of this revolution and the scientific practice it exemplified. This critique of philosophy produced an epistemology radically different from traditional idealism and empiricism. Simultaneously, it opened the way to a new history of the sciences which had been developed by Georges Canguilhem and Michel Foucault.

This critique of empiricism and idealism in the name of science clearly parallels the theses of dialectical materialism. Hence a dialectical-materialist analysis illuminates both the achievements and limitations of the tradition.

In this book Dominique Lecourt presents an exposition of Bachelard's epistemological writings and then offers a critique of that epistemology and of the works of Canguilhem and Foucault from a Marxist-Leninist viewpoint. In an introduction written especially for the English edition he compares Bachelard's positions with those of the different, but in some respects analogous, Anglo-Saxon traditions in epistemology descending from the works of Karl Popper, in particular with Thomas Kuhn's Structure of Scientific Revolutions.
More info about the ebook
Publisher: Verso
Published: 2018-01-01
ISBN: 9781788732086
English
Category: Non-Fiction

Late Marx and the Russian Road

Value and Naturalism in Marx

The Progress of This Storm

The Retreat from Class

The Old Is Dying and the New Cannot Be Born

Masters of the Universe: Hayek, Friedman, and the Birth of Neoliberal Politics – Updated Edition

Biggest Political Mistakes in the History

What Does the Ruling Class Do When It Rules?