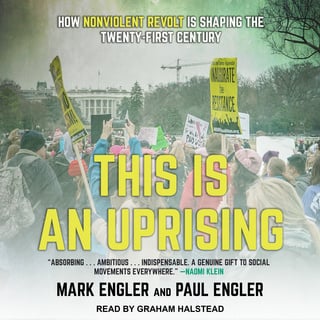 This Is an Uprising: How Nonviolent Revolt Is Shaping the Twenty-First Century

This Is an Uprising: How Nonviolent Revolt Is Shaping the Twenty-First Century

Author: Mark Engler, Paul Engler
Narrator: Graham Halstead
Format: Audiobook
11H 28Min
English
3
Strategic nonviolent action has reasserted itself as a potent force in shaping public debate and forcing political change. Whether it is an explosive surge of protest calling for racial justice in the United States or a demand for democratic reform in Hong Kong or Mexico, when mass movements erupt onto our television screens, the media portrays them as being as spontaneous and unpredictable. In This Is an Uprising, political analysts Mark and Paul Engler uncover the organization and well-planned strategies behind such outbursts of protest, examining core principles that have been used to spark and guide moments of transformative unrest.

To Shape a New World

The Force of Nonviolence: An Ethico-Political Bind

The All New Don't Think of an Elephant!

The Art of Community