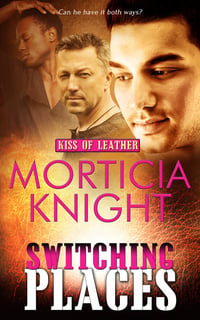 Author: Morticia Knight
Format: As e-book
English
4.11
Tai wishes Master Lucas wasn’t such an adamant Top, but he’s also crushing on the sweetly submissive Elliot. Could he have it both ways?

Tai has hit a wall in life. From all outward appearances, he’s the guy who has everything—looks, personality and money. But the modeling gigs are drying up and he still hasn’t found that special someone to call his own. The part-time work at Kiss of Leather is quickly becoming full-time to prevent the drain on his dream-business savings.

When Master Lucas confesses to Tai that he doesn’t only see him as a hookup and offers him a contract, there are a ton of considerations. They both realize that serious compromises would have to be made for them to have a relationship. But what if they found a third, a sub who could bottom for Tai and also do TPE with Master Lucas? Once the idea takes hold, Tai knows just the perfect boy for them both. Even better? He’s right there at Kiss of Leather, and Tai can’t wait for Elliot to turn them all into a throuple.
More info about the ebook
Publisher: Pride Publishing
Published: 2018-02-27
ISBN: 9781786516480
English
4.11
Category: Romance
Series: Kiss of Leather: 8
Romance Contemporary romance

The Truth As He Knows It