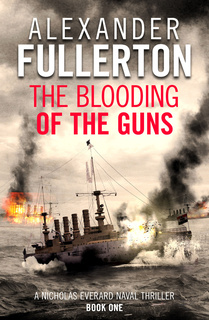 The Blooding of the Guns

The Blooding of the Guns

Author: Alexander Fullerton
Format: As e-book
English
4
A young sailor with the weight of the world on his shoulders, a brother in the line of fire, and the greatest naval battle of all time…
Jutland, 1916: In the icy waters of the North Sea, the Royal Navy awaits the challenge of the Kaiser’s High Sea Fleet.

Sub-lieutenant Nick Everard could never have imagined the terror he would face as his destroyer races to launch its torpedoes into the blazing guns of a horizon obscured by dreadnoughts.

But when the steering-gear on HMS Warspite jams, it is up to Nick, along with his brother, Hugh, to save thousands of lives.

Dramatic, action-packed and brimming with suspense, The Blooding of the Guns launches the epic career of Nicholas Everard.
Praise for Alexander Fullerton
‘The most meticulously researched war novels that I have ever read’ Len Deighton
More info about the ebook
Publisher: Canelo Action
Published: 2017-07-03
ISBN: 9781911591504
English
4
Category: Crime
Thriller World War I Under the Sea Sea stories

Patrol to the Golden Horn

The Wind Off the Sea

The Last Secret of the Ark

Murder at the Capitol

A Minute to Midnight