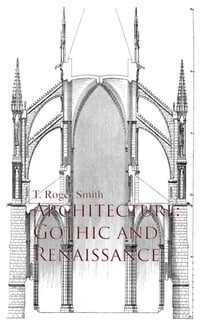 Author: T. Roger Smith
Format: E-book
English
1
The history, the features, and the most famous examples of European architecture, during a period extending from the rise of the Gothic, or pointed, style in the twelfth century to the general depression which overtook the Renaissance style at the close of the eighteenth, form the subject of this little volume. I have endeavoured to adopt as free and simple a mode of treatment as is compatible with the accurate statement of at least the outlines of so very technical a subject.

Though it is to be hoped that many professional students of architecture will find this hand-book serviceable to them in their elementary studies, it has been my principal endeavour to adapt it to the requirements of those who are preparing for the professional pursuit of the sister arts, and of that large and happily increasing number of students who pursue the fine arts as a necessary part of a complete liberal education, and who know that a [viii] solid and comprehensive acquaintance with art, especially if joined to some skill in the use of the pencil, the brush, the modelling tool, or the etching needle, will open sources of pleasure and interest of the most refined description.

The broad facts of all art history; the principles which underlie each of the fine arts; and the most precious or most noteworthy examples of each, ought to be familiar to every art student, whatever special branch he may follow. Beyond these limits I have not attempted to carry this account of Gothic and Renaissance architecture; within them I have endeavoured to make the work as complete as the space at my disposal permitted.

Some portions of the text formed part of two courses of lectures delivered before the students of the School of Military Engineering at Chatham, and are introduced here by the kind permission of Sir John Stokes. Many of the descriptive and critical remarks are transcripts of notes made by myself, almost under the shadow of the buildings to which they refer.
More info about the ebook
Publisher: anboco
Published: 2016-08-19
ISBN: 9783736405684
English
1
Category: History
History and Architecture

The Stones of Venice III

Architecture: A History in 100 Buildings

An Abridgment of the Architecture of Vitruvius

The Man in the Glass House: Philip Johnson, Architect of the Modern Century

The Seven Lamps of Architecture

Lectures on Architecture and Painting

The Ten Books on Architecture

A B C of Gothic Architecture

An Architecture Manifesto: Critical Reason and Theories of a Failed Practice

Picasso and the Painting That Shocked the World

The New Localism: How Cities Can Thrive in the Age of Populism