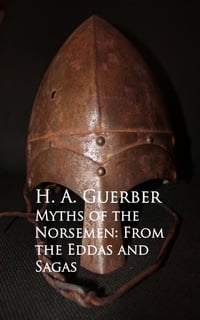 Myths of the Norsemen: From the Eddas and Sagas

Myths of the Norsemen: From the Eddas and Sagas

Author: H.A. Guerber
Format: As e-book
English
3.25
The prime importance of the rude fragments of poetry preserved in early Icelandic literature will now be disputed by none, but there has been until recent times an extraordinary indifference to the wealth of religious tradition and mythical lore which they contain.

The long neglect of these precious records of our heathen ancestors is not the fault of the material in which all that survives of their religious beliefs is enshrined, for it may safely be asserted that the Edda is as rich in the essentials of national romance and race-imagination, rugged though it be, as the more graceful and idyllic mythology of the South. Neither is it due to anything weak in the conception of the deities themselves, for although they may not rise to great spiritual heights, foremost students of Icelandic literature agree that they stand out rude and massive as the Scandinavian mountains. They exhibit "a spirit of victory, superior to brute force, superior to mere matter, a spirit that fights and overcomes." "Even were some part of the matter of their myths taken from others, yet the Norsemen have given their gods a noble, upright, great spirit, and placed them upon a high level that is all their own." "In fact these old Norse songs have a truth in them, an inward perennial truth and greatness. It is a greatness not of mere body and gigantic bulk, but a rude greatness of soul."...
More info about the ebook
Publisher: anboco
Published: 2016-08-23
ISBN: 9783736406759
English
3.25
Category: Classics
Classic Historical Fiction Fairy tales

The Book of Viking Myths

The Sagas of Ragnar Lodbrok

Homer's The Iliad and The Odyssey: A Biography

The Children of Odin: The Book of Northern Myths [Booktrack Soundtrack Edition]

The Children of Odin: The Book of Northern Myths

From the Earth to the Moon; and, Round the Moon

Popular Tales from the Norse