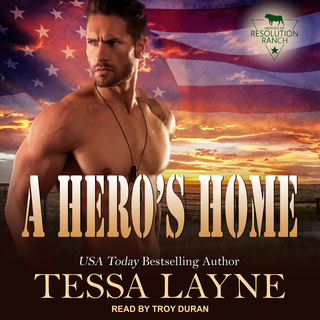 Author: Tessa Layne
Narrator: Troy Duran
Format: Audiobook
4H 33Min
English
3.72
When a grouchy veteran rescues a cheerful hippie will it be a match made in heaven or a disaster waiting to happen?

When Army Ranger Jason Case accepts an invitation from his closest friend to join Resolution Ranch, the last thing he expected was to be a hero to Prairie's resident hippie, Millie Prescott. He's no hero, and he wants to be left alone.

Millie knows she and Jason have a cosmic connection-he saved her from certain death. There's only one problem . . .

- He's a hardened warrior-she's a peacemaker.

- He's the man of her dreams-she's a thorn in his side.

Neither Jason or Millie could have predicted the blistering heat that erupts between them, and in a moment of lust-fueled insanity, the grouchy vet agrees to help Miss Sunshine save her struggling vineyard and put Prairie on the map for heirloom wine.

But trouble comes to Prairie when Jason's family decides they'll stop at nothing to bring Jason back where he belongs, running the Case wine empire. And Jason must decide how far he's willing to go to ensure the woman he's fallen for doesn't become collateral damage.