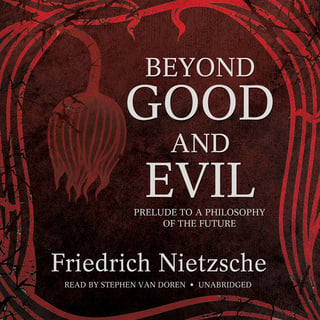 Author: Friedrich Nietzsche
Narrator: Stephen Van Doren
Format: As audiobook & As e-book
8H 10Min
English
3.94
This is one of the most important works written by Nietzsche and represents his attempt to sum up his philosophy. The great nineteenth-century philosopher refines his previously expressed ideal of the superman in this work, a fascinating examination of human values and morality. It takes up and expands on the ideas of his previous work, Thus Spoke Zarathustra, but approaches it from a more critical, polemical stance. In nine parts, this book is designed to give listeners a comprehensive idea of Nietzsche’s thought and style.

In Beyond Good and Evil, Friedrich Nietzsche attacks past philosophers for their alleged lack of critical sense and their blind acceptance of Christian premises in their consideration of morality. The work moves into the realm “beyond good and evil” in the sense of leaving behind the traditional morality, which Nietzsche subjects to a destructive critique, in favor of what he regards as an affirmative approach that fearlessly confronts the contextual nature of knowledge and the perilous condition of the modern individual.

Of the four “late-period” writings of Nietzsche, Beyond Good and Evil most closely resembles the aphoristic style of his middle period. In it he exposes the deficiencies of those usually called “philosophers” and identifies the qualities of the “new philosophers”: imagination, self-assertion, danger, originality, and the “creation of values.” Religion and the master and slave moralities feature prominently as Nietzsche re-evaluates deeply-held humanistic beliefs, portraying even domination, appropriation, and injury to the weak as not universally objectionable.
Translator: Helen Zimmern
More information about the audiobook:
Publisher: Blackstone Publishing
Published: 2009-07-23
ISBN: 9781624608766
More info about the ebook
Publisher: Interactive Media
Published: 2013-08-15
ISBN: 9781909676084
8H 10Min
English
3.94
Category: Non-Fiction
Morals & ethics

Fundamental Principles of the Metaphysics of Morals