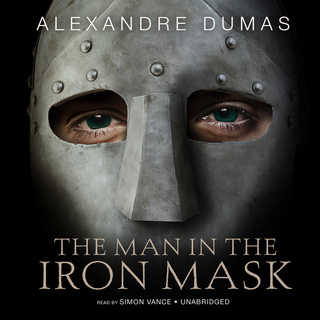 Author: Alexandre Dumas
Narrator: Simon Vance
Format: As audiobook & As e-book
22H 12Min
English
3.81
Thirty-five years after the events of The Three Musketeers, D’Artagnan, Athos, Porthos, and Aramis find themselves caught between conflicting loyalties in a power struggle that could change the face of the French monarchy.

For eight long years, a young prisoner has languished within the dreaded Bastille, his face hidden in an iron mask. He knows neither his true identity nor the crime for which he has been imprisoned. But Aramis knows this secret—a secret so dangerous, it could topple the King from his throne. Will his cause divide the once indivisible band of musketeers?

A tale of mystery, adventure, and political intrigue, this conclusion to Dumas’s swashbuckling musketeer saga is based on the true story of a masked prisoner who dwelled in the Bastille during Louis XIV’s reign and whose identity remains in question to this day.
Translator: Unknown
More information about the audiobook:
Publisher: Blackstone Publishing
Published: 2010-02-10
ISBN: 9781483090061
More info about the ebook
Publisher: Interactive Media
Published: 2013-10-15
ISBN: 9781909904613
22H 12Min
English
3.81
Category: Classics
Classic Historical Fiction Adventure novel Books become films Books made into series and movies Con Artists