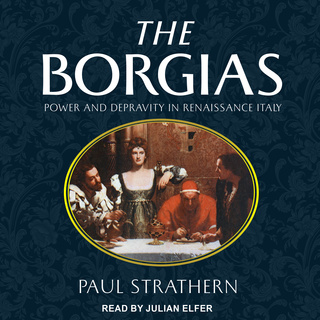 Author: Paul Strathern
Narrator: Julian Elfer
Format: Audiobook
11H 12Min
English
4.49
The Borgia family have become a byword for evil. Corruption, incest, ruthless megalomania, avarice, and vicious cruelty-all have been associated with their name. And yet, paradoxically, this family lived when the Renaissance was coming into its full flowering in Italy. Examples of infamy flourished alongside some of the finest art produced in western history.

This is but one of several paradoxes associated with the Borgia family. For the family which produced corrupt popes, depraved princes, and poisoners, would also produce a saint. These paradoxes which so characterize the Borgias have seldom been examined in great detail. Previously history has tended to condemn, or attempt in part to exonerate, this remarkable family. Yet in order to understand the Borgias, much more is needed than evidence for and against. The Borgias must be related to their time, together with the world which enabled them to flourish. Within this context the Renaissance itself takes on a very different aspect. Was the corruption part of the creation, or vice versa?

The primitive psychological forces which first played out in the amphitheaters of ancient Greece are all here. Along with the final, tragic downfall.
More information about the audiobook:
Publisher: Tantor Audio
Published: 2019-08-06
ISBN: 9781977347381
11H 12Min
English
4.49
Category: History
Europe Italy History

The Feud That Sparked the Renaissance: How Brunelleschi and Ghiberti Changed the Art World