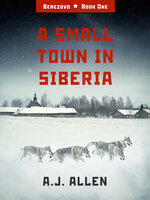 A Small Town in Siberia

An epic tale of love and revolution
Russia, 1907. The revolution has failed. Leon Trotsky is one of a group of political prisoners being escorted by armed police, in a convoy of horse-drawn sleighs, to a secret location in the icy north of the country. Here they will be exiled as political prisoners. If, that is, they survive the journey.

Meanwhile, in the small Siberian town of Berezovo, the local amateur dramatics group is preparing for their next play only for it to be postponed on command of the chief of police. Doctor Tortsov believes an outbreak of typhus is imminent and seeks to quarantine the region but is overruled by the mayor. The town’s carpenters receive orders for scores of new sleighs but are under strict instructions to keep them secret. Rumours abound that Berezovo is about to receive some very important visitors.

As the convoy nears its destination, the lives of the prisoners and townsfolk are on a collision course that will make history.

A Small Town in Siberia is the first in a series of novels about Berezovo. It contains a cast of memorable and intricately crafted characters who together populate a story of epic scope, reminiscent of the Russian classics of old, but which revels in the fine details of life, love, gossip, politics and intrigue. It is a striking debut from a significant new voice in fiction.